Brokers added 10,516 new listings of single family homes and condos to the Northwest Multiple Listing Service inventory last month, the highest monthly volume since August 2018. Compared to the same month a year ago, new listings across the 23 counties in the report were down slightly (79 fewer units).

MLS members also reported 10,261 pending sales during the same timeframe, the highest number of mutually accepted offers since July, and nearly matching the year-ago total of 10,311.

“After the housing adjustment in 2018, this year’s spring market is back to frenzied in the more affordable and mid-price ranges,” remarked J. Lennox Scott, chairman, and CEO of John L. Scott Real Estate. Noting March is the start of the prime-time selling season, he expects this year “will be no exception.” He also commented on improved affordability from last fall’s price adjustments in the close-in job centers of Seattle and the Eastside. “This improved affordability, along with lower interest rates and very strong job growth, all point us in the right direction for red-hot acceleration again this year,” Scott stated.

Commenting on the uptick in new listings and new sales, broker Dean Rebhuhn pointed to lower mortgage interest rates and a growing selection of properties as drivers of activity. “Well-priced properties are selling. Buyers who are getting fully underwritten loan commitments are winning the prize – the home,” stated Rebhuhn, the owner of Village Homes and Properties in Woodinville.

At month end, there were 12,017 active listings of single family homes and condos in the Northwest MLS database. That represents an increase of more than 36 percent from a year ago when there were only 8,825 active listings. Inventory more than doubled in King County compared to a year ago, rising from 2,060 active listings to 4,263 at the end of March. Nine counties reported less inventory than 12 months ago.

Even with improving inventory, there are less than two months of supply overall and in seven counties, including Pierce (1.2 months), Snohomish (1.3 months), Kitsap (1.4 months) and King (nearly 1.9 months).

“March signaled the beginning of the annual rise in King County residential listing inventory, and this year’s active listings are building on a higher base of listings than previous years,” observed John Deely, principal managing broker at Coldwell Banker Bain in Seattle. He also noted pending sales (10,261 during March) kept pace with new listings (10,516) to slow the buildup of inventory.

“Many buyers found the increased inventory meant more choices and less competition in many market areas,” said Deely, a member of the Northwest MLS board of directors. “In core Seattle markets, new listings that are competitively priced are seeing multiple and contingency-stripped offers,” he added.

OB Jacobi, president of Windermere Real Estate, described March as an “eventful month for real estate,” as the snow finally melted and interest rates dropped, “nudging buyers off the fence and back into the market. The result was a spike in pending sales between February and March (up more than 49 percent), and pop in price growth in several counties, suggesting we are entering an active spring market.”

“In Kitsap County, the buyers have arrived to the market faster than sellers,” reported Frank Wilson, Kitsap regional manager and branch managing broker at John L. Scott’s Poulsbo office. “Low-interest rates are giving buyers a break in house payments, which allows them to buy a little more house. Buyers have received the message about the spring market, but sellers are still waiting in the wings,” he commented.

Broker Dick Beeson said the South Sound market is somewhat of an anomaly, as prices continue to rise despite growing inventory. “Multiple offers are less frequent in this market, and, unlike 6-to-12 months ago, sellers are now agreeing to do repairs and pay buyer’s closing costs,” according to Beeson, principal managing broker at RE/MAX Northwest Realtors in Gig Harbor. “Some type of negotiation is once again prevalent in almost every sale,” he added.

Beeson said in certain higher price ranges buyers and sellers have “almost equal footing.” He suggested it could become a buyer’s market in South Sound “when the Seattle/King County market flattens out even more and can provide homes at affordable prices so those who don’t work in high tech can afford them.”

“Areas outside of King County and along the I-5 corridor outperform as people continue to look for value outside the main urban centers,” observed James Young, director of the Washington Center for Real Estate Research at the University of Washington. He expects the spring price growth will be “solid” as long as demand remains.

“The market is highly interest rate sensitive, and this is reflected in current price trends in the region,” Young stated. “Given interest rates are now 70 basis points lower than their peak in November last year (and back down near historic lows), house prices could rise by 8.4 percent and people could keep the same mortgage repayments. This means someone who could have purchased a $450,000 house six months ago can now purchase a house costing $487,800 and keep the same monthly repayment, an 8.2 percent increase,” he explained.

Northwest MLS members reported 6,750 completed transactions during March, a drop of about 8.3 percent from a year ago, and likely a result of February’s heavy snows that resulted in hazardous roads and kept many people housebound for several days.

“Although closed sales were down in March, we believe February’s snowy weather slowed the closing of pending transactions,” suggested Mike Grady, president, and COO of Coldwell Banker Bain. “Most notably in determining the strength of our market is the ratio of new listings and pending sales, which were close, resulting in less than two months of inventory in many areas. We expect the market to continue these trends as we head into what is always the busiest time of the year.”

Scott also expects momentum to continue. “Looking ahead, more new listings are on the way, and the more affordable and mid-price ranges will see strong price appreciation this year – just not at last year’s extreme levels,” he commented.

Condo activity remains mostly unremarkable, although inventory is improving. Brokers added 1,487 new listings to the selection last month and reported 1,387 pending sales. Inventory at month end stood at 1,610 active listings, up more than 85 percent from a year ago. That still leaves months of supply below two months in many areas, including King (1.95 months of supply), Snohomish (1.1 months), Pierce (0.83 months), and Kitsap (1.67 months).

MLS members reported 932 closed sales of condominiums during March with a median price of $367,150, about the same as the year-ago price of $365,000. In King County, the median sales price for condos was $434,000, a drop of almost 7 percent from twelve months ago.

Northwest Multiple Listing Service, owned by its member real estate firms, is the largest full-service MLS in the Northwest. Its membership of around 2,200 member offices includes more than 29,000 real estate professionals. The organization, based in Kirkland, Wash., currently serves 23 counties in the state. 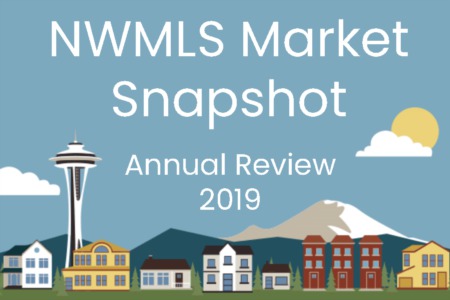 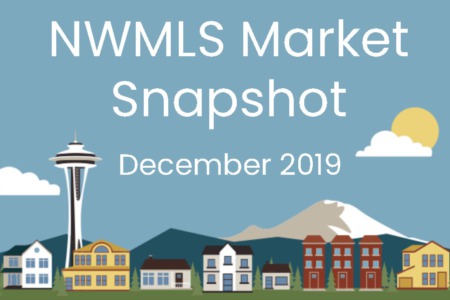 Eager Home Buyers Were Plentiful in December But Choices Were Meager

KIRKLAND, Washington (January 6, 2020) - "The buyers are out there and are showing up at open houses and making multiple offers on new listings," was ...Read More 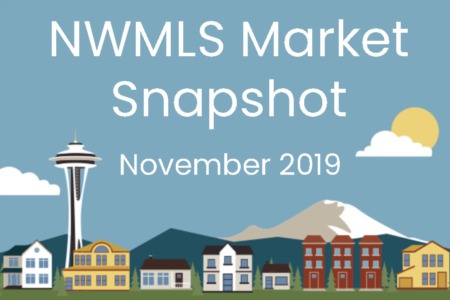